In this session, learn to build end to end Flutter mobile application development with AWS Amplify Flutter SDK as well as create custom plugins using AWS Amplify Android/iOS SDK. We share with users the experience and features such as Analytics, in-app messaging, and offline capabilities with datastore/AppSync. We demonstrate a complete CI/CD pipeline for both iOS/Android Flutter applications. It includes stages like unit/widget testing, flutter static code analysis with SonarQube which automates build completely for both iOS on Amazon EC2 Mac with SSM and Android on code builds for containers. Uncover how to integrate testing with Appium and use AWS Device Farm for both Android/iOS devices to generate build for APK/IPA files. We also showcase how to build remote mobile application development environments based on Amazon EC2 mac and Ubuntu with NICE DCV along with physical device debugging on Amazon EC2. Download slides »
Speakers:
Arun Balaji, Prototyping Architect, AISPL
K V, Sureshkumar, Prototyping Architect, AISPL 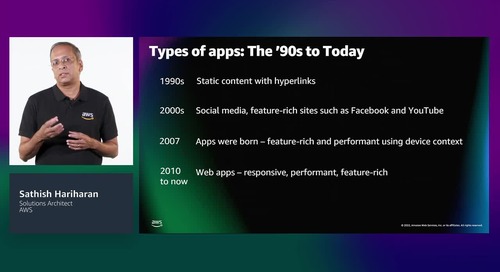 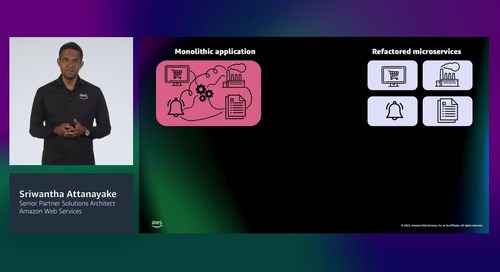 AWS is a great place to run your .NET applications. However, we often encounter customers who are running l... 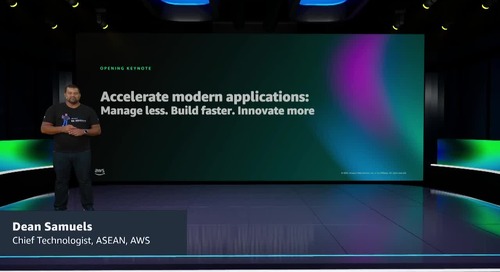 Cloud fundamentally changes the way we build and operate applications. Digital transformation has dramatically impacted the way organizations deliver value and the rate at which they make changes to t 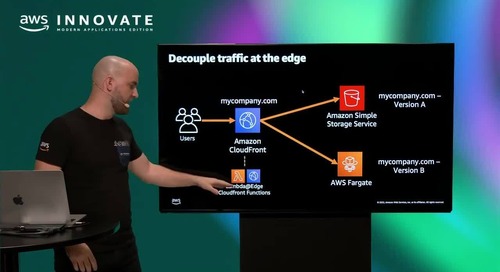 To keep growing and winning business, organizations need to invent new digital products, create new customer experiences and adapt to the changing needs and demands of their customers. This session pr 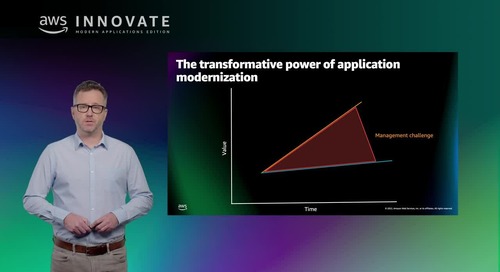 18:20
Rapid innovation with the transformative power of modern applications

Modern applications enable rapid innovation. In this session, we analyze the concept of business transformation through application modernization. We discuss the current opportunities and problems fac 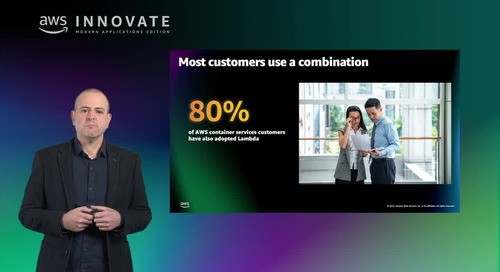 34:36
Modernization with containers and serverless technologies

Modern applications are built with a combination of modular architecture patterns, serverless operational models, and agile developer processes. They allow organizations to innovate faster while reduc 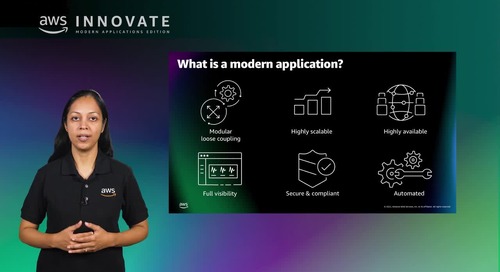 28:11
Building a smarter and agile business with modern applications

Organizations and businesses need to build applications faster than ever, with the ability to scale quickly to potentially millions of users, have global availability, manage petabytes if not exabytes 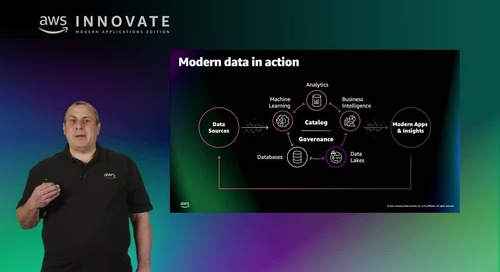 Organizations need to be able to separate the burden of legacy systems supporting mission critical applications and services, to accelerate change and innovate. In this session, learn why a paradigm s 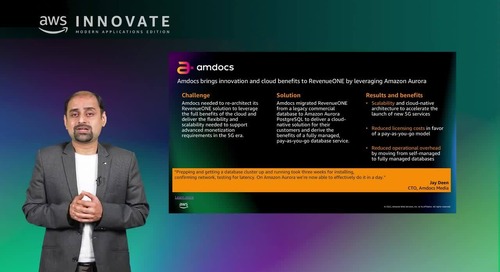 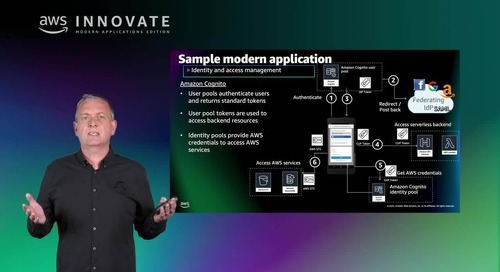 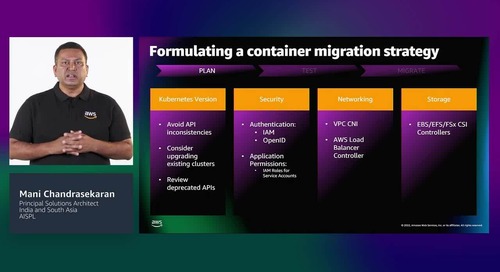 With the increasing popularity of public cloud and cloud-native systems to simplify operations and reduce management overhead, containerization has become one of the fastest-developing IT fields that 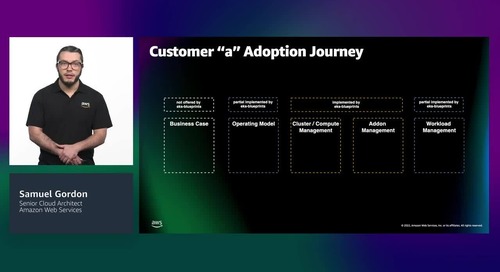 Containerization has transformed the way modern applications are developed. In this session, learn how Amazon EKS Blueprints, a collection of Infrastructure as Code (IaC) modules help you to configure 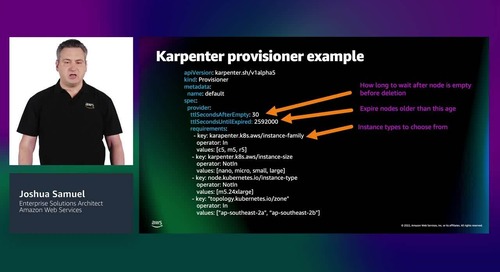 20:02
Get started with Karpenter - Just-in-time Nodes for your Amazon EKS Clusters

In this session, learn how Karpenter, an open-source high-performance Kubernetes cluster autoscaler simplifies Kubernetes infrastructure with the right nodes at the right time. We cover how to setup K 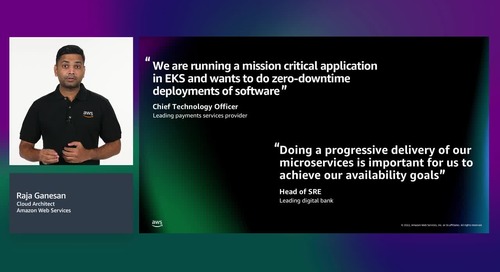 Doing a progressive delivery of software in a containerized environment is becoming the norm. In this session, we cover the importance of Canary or Blue/Green deployment in Amazon EKS, and how you can 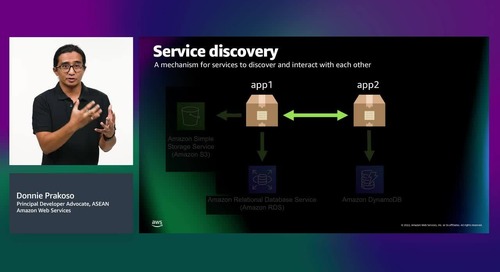 Building applications with containers has become the preferred approach for developers. Twelve-Factor App, a methodology for building software-as-a-service apps has become the most popular and adopted 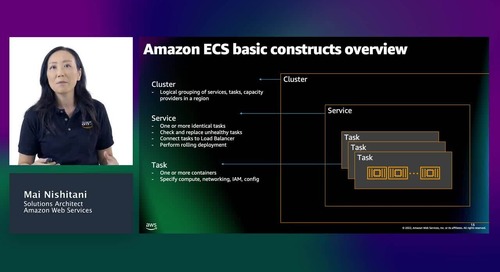 As new customers look to adopt containers and accelerate software delivery, they need to learn multiple aspects to build, deploy, run, monitor, and secure their containerized applications. This sessio 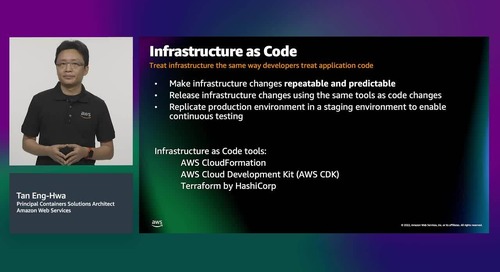 Containers have emerged as a new standard for how we package and deploy our applications. Traditionally, in addition to managing our containerized applications, we had to manage and maintain the serve 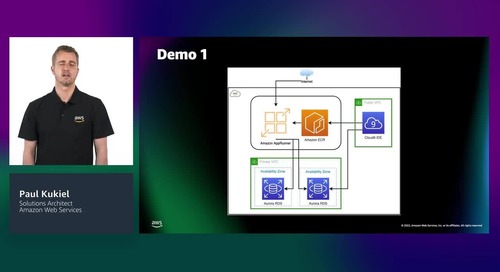 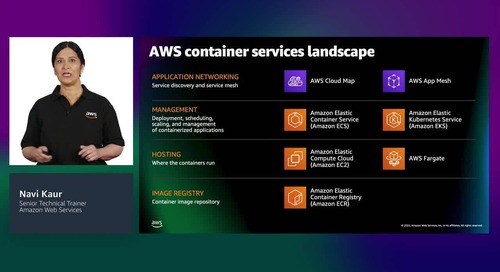 In this session, learn how to leverage the efficiencies and benefits of containers in a hybrid environment. We discuss how to satisfy compliance, data gravity, and other business requirements by runni 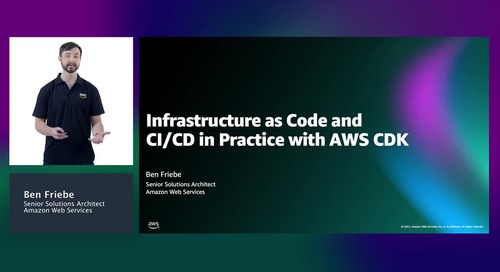 28:13
Infrastructure as Code and CICD in Practice with AWS CDK 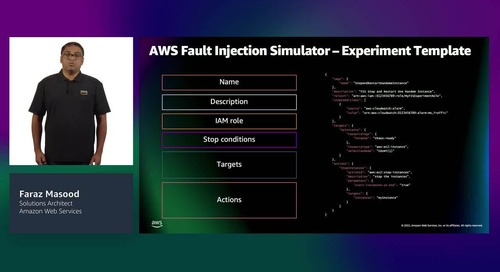 With the rise of microservices and distributed cloud architectures, applications have become more complex. Failures have become much harder to predict, leading to costly outages. Chaos engineering is 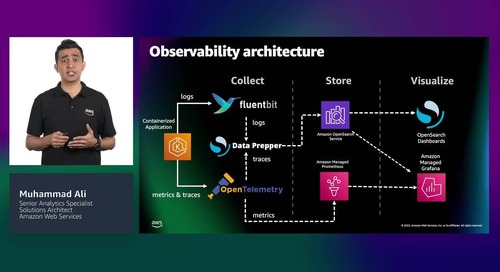 In the past, organizations have had to choose between innovating faster and maintaining control over cost, compliance, and security. By building efficient observable systems, it helps you reduce the d